We are very pleased to start the new series „Artist in Residence“ on Schönschrift.org with Michael John Whelan and Keef Winter a.k.a. Rubashov. The two musicians and visual artists prove that the art of writing also belongs to their range of special abilities. And they make us look forward to their interview on the Deutschlandfunk „Corso“ show on one of the last days of 2011 (dates see below). Thank you for that!
In the category „Artist in Residence“ we invited artists of any kind to write texts for Schönschrift.org to mix our writing about art with the art of writing. The texts will be posted in English or German language. Enjoy Vol. 1!

Man sitting on the moon, moon, curve with planes makes sliver, sliver is hole. From a drill. Drilled through trees. No, through wood. Not one but many (plastic men). No, vacuums. No. Holes, air holes in cheap furniture. Holes to let your back breathe. Nice man, men, plastic, holes. Nice man serving me in the canteen of the radio station. Everything is one euro he chimes, coin slot in a machine. The corridor. The machine. The corridor is the machine, and I am young. Sweets, coke…uniforms. Many: school, police, church, office. Slots and people with uniforms. Back to canteen on the 5th floor of the machine. Tune in, the coffee is ok. Elevator down to the waiting man. 3rd floor. Curved corridor lined with cells, red light on, red light off. Mine, Studio 5. A welcome face in Jürgen. Into the cell, then another deeper cell, cocooned within the first. Time suddenly speeds up. Me and my comrade No. 1, and Jürgen with the friendly face. And the other one, behind the glass, monitoring, recording. Talking, ticking, talking, always the clock there. 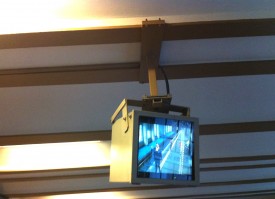 We are told only four minutes left, time is really fast now, but it begins to readjust itself into an order we know. But I like the new speed. Its clean like veneer, but with good wood behind. Like my cell, like the chair where I drank my coffee. Leaving the cell I notice the view over Berlin. Whole lives have been built on a view. Terrible thoughts inspired to action over a view. Final endings decided looking on a view. Lovers joined, facts questioned, lies made up because of, and in front of, a view. I never noticed the view, or even the windows within the cocoon. The view over the trees, the wood, the veneer, the hole, the chair, the man sitting on the moon.

On the U4 train on the way home, there was a Leonard Cohen quote on the screen.

It was noon, I was led into a dimly lit studio in the British Broadcasting House off Great Portland Street in London and told to wear a set of headphones until the call came through from Berlin. As I looked around I noticed many types of recording devices and audio playback equipment dating from the 1960’s to present day. The table in front of me was a customised table with a sound desk built into it and my headphones plugged directly into a quarter inch jack input at its side. I stared up at the clock in front of me hung on the wall and counted the seconds as the minute hand swung toward 12.

The call came through at precisely the agreed time (an unnerving salute to the notorious punctuality of Germany), Juergen was on the end of the line along with my comrade Rubashov. The conversation began slowly with introductions, I waited nervously aware that my voice was the only connection to cues from interviewer to interviewees. As we talked over the project the details laid themselves out. It was clear that the preparation we had tapped through our electronic cells provided us with an edge of reason and appropriately restrained response.

Juergen probed and prodded into the concepts and even semantics we had laid before him;

„do i need to know the text before i can listen to this record?“
„tell me more about the space you created this in?“
„what is a concept album in this case?“

The result awaits to be known. We were led out of the interview room and placed back into the public realm only making contact for a brief minute to arrange a further breakdown of the process. Juergen seemed content with the interview but we will only know the outcome by the 29th of this month.

Now I sit in the British Library surrounded by hundreds of others, heads in books, texts littering their desks and the faint tapping of typing from all directions.

The interview, as experienced by the authors, will be broadcasted on the Deutschlandfunk „Corso“ show on the 30th December at 15.05 h. Listen to the interview.

…is the music project of visual artists Michael John Whelan and Keef Winter. Inspired by the protagonist from Arthur Koestler’s novel ‚Darkness at Noon‘, it is a place where ideas go to die and ultimately be reborn. A testament to humanities creative abilities and confused sentimentalities. Rubashov are currently raising funds for their new project.

Born in Dublin, Ireland, Michael John Whelan lives and works in Berlin. He received a BA in Fine Art from IADT-DL, Dublin in 2002 and an MA in Fine Art from Chelsea College of Art and Design (University of the Arts, London) in 2004. He works in photography, video, film and drawing. Recent exhibitions include Under the receding wave at Kunstverein Bochum (2009), Cinematic at Kunstverein Bremerhaven off site (2010), Where Gravity Makes You Float at Grimmuseum, Berlin (2010), Void at Galerie Robert Drees, Hannover (2010), Taste my photons at Noorderlicht Gallery, Groningen (2011), Artissima 18 with Grey Noise Gallery (2011). Upcoming solo presentations include B&N Gallery, London, and Grey Noise Gallery. In 2005 he was the recipient of the Clifford Chance/University of the Arts Sculpture Award. His work is in a number of public and private collections.

Northern Irish artist Keef Winter received an MFA at Edinburgh College of Art in 2006 and is currently undertaking a practice-based Phd at the University of Ulster. He works in sculpture, performance and independent publishing. He co-founded Space Delawab & Not Squares in 2008 and Allotrope Press & Rubashov in 2011. He is the recipient of an ACES award from the Arts Council of Northern Ireland in 2011. Recent exhibitions include Speed Towerz at Bahrain Fort Museum (2009), Scopophobia at Golden Thread Gallery, Belfast (2009), Arcade Park at Brooklyn Fireproof, New York (2009), Hide Those Dirty Hands at The Joinery, Dublin (2011) and I‘m Squatting In Your Condo at 3331 Arts Chiyoda, Tokyo (2011).